I get a lot of questions on this blog.

Why are you still writing this crap?
Do bears eat beets?
Who is Doug Slaten?

…and of course – how do I baseball?

I do my best to answer these questions, mostly through nefarious statistical means, thanks to the likes of Baseball Reference, Fangraphs, and Baseball Prospectus. Yet, every so often, I get a question that goes beyond the abilities of those fantastic websites, and I am required to fall back on my education in science and medicine to get to the root of the matter, and provide my dear readers the answer they desire when they ask me the tough questions.

The biggest question I’ve been getting thus far? One that haunts many a player from the Caribbean – how old REALLY is <name here>?

While you can find many instances of players from the Dominican and parts elsewhere to the south of the United States fibbing and whittling off a couple of years off of their actual age in an effort to be more attractive a prospect, in the hopes of getting a bigger signing bonus, one country does occasionally provide us their top-notch talent, along with some additional mystery shrouding the actualities of their biological age due to their political perspectives and the concomitant shrouding of their borders – Cuba.

The latest Cuban to wow the MLB? Yasiel Puig. The latest player to show up in my search history, due to people asking what his actual age was?

I’m a man of connections and curiosity; I shall use those powers of evil for good, and, with a little help from some medical expert friends of mine, answer this question.

HOW OLD IS YASIEL PUIG? NO REALLY, HOW OLD?

Ready? Let’s get some basics out of the way first…

Puig is a beast, but could stand to know how to ease those aches and pains, post outfield wall collisions. Let’s get him informed, yes?

Floss? How often does he floss? Secondhand smoke exposure? Besides the flossing and smoking he does to NL West pitching?

Obviously the likes of Brandon League and Ted Lilly rely upon Puig to do something for them daily, like bring back homers and lay waste to opponent’s pitching. Hard work. We should list that…

He defected from Cuba then made a bazillion dollars, so points for that. He also had to live in Tennessee, so more points for that hardship… OK, looking good…

PUIG IS PED FREE I DON’T EVEN…

OK, looks good. My fellow medical expert buddies, what do we have as a result for Mr. Puig?

Well, there you have it. Expert opinion, expert analysis. Yasiel Puig is actually 19 years old. It’s a scientific and medical fact.

He’s been lying to us all along. 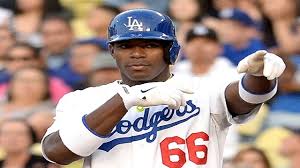 By now we have all seen the valiant attempt at snagging Philadelphia Phillies second baseman Chase Utley‘s home run in last night’s game made by Los Angeles Dodgers outfielder Yasiel Puig. If not, here it is again:

This looks all too familiar to Washington Nationals fans, who are just now winding down therapy sessions in response to the eerily similar play made by Bryce Harper back on May 13, again at Dodgers Stadium:

Courtesy of SB Nation and SI.com

While Puig thus far has been fortunate to suffer less painful repercussions post-wall collision than Harper, there are a number of parallels to both collisions that make you scratch your head at the possibility that there might be something amiss out in right field.

First, let’s pan out, and take a look at where Puig and Harper had their incidents – Puig’s collision is the blue circle, Harper’s the red:

Between the .gifs and this panoramic view of the location of the injuries, we can see that both occurred in roughly the same area – where the wall isn’t so much wall, but video scoreboard/billboard. While the panoramic pic I have used was taken from 2007 and doesn’t reflect some of the new changes that were undertaken prior to the 2013 season, it allows us to confirm that the crime scenes are close to one another and share the same background – the video boards. For those so inclined, check out this post by SB Nation’s True Blue LA for more details and a CGI-style rendering of the outfield wall to get more detail.

Another quirk particular to Dodger Stadium that raises questions about the particulars of the collisions at the warning track; for each .gif, we see that both players – both 6’3″ in height – had roughly three steps worth of warning track before they met the wall, which seems a bit stingy, especially in this day and age and the sheer size and mass of the players of today’s game.

With the help of my crack staff of interns and fact checkers here at HDIB?, I found some interesting facts revolving around the various warning tracks around MLB stadiums and what outfielders have to say about them.

First – there is no real regulation as to how wide the warning track needs to be, or what material it should be composed of, only some very loose suggestions. To quote the Baseball Tomorrow Fund Baseball Maintenance Guide:

The warning track is normally 15 feet deep in front of all obstructions; however, consult the leagues and associations that will utilize the field regarding rules and regulations.

…and with respect to what materials it is made of:

So what we have here is one of the more crucial safety measures on a baseball field being left open to interpretation – let’s look more at those suggestions and interpretations and their effects on the outfield and the outfielders.

For further discussion of the notion that there is no set standard for warning track material and width, we have this article, which references the book Sports Fields: A Manual for Design, Construction and Maintenance and confirms that MLB warning tracks are in the 10-15 foot width range. This harkens back to the days of the first warning track, seen at Yankee Stadium in 1949 and had a width of 10 feet. It also briefly mentions that not all warning tracks are made of the same material, which adds additional layers of confounding for an outfielder – different materials will have differing tactile and audio cues, if they have any at all.

So we have a safety measure of different widths – outfielders will get no less than 10 feet, but sometimes can get 12, maybe even 15, which equates to three to five steps before hitting the outfield wall – and now different types of materials that may crunch when they step on it, or may not, and may or may not give them a different ‘feel’ as they transfer from grass/turf to the warning track. Essentially, all three of the senses available for the outfielder to discern where they are (taste and smell don’t play a role here, or at least I would hope not) are affected with these loose applications of the rules.

How do outfielders feel about that?

Thanks to this article over at ESPN, we have a nice sampling of what’s being said by those affected by the ever shifting warning track. For those link click averse, to paraphrase the outfielders, it’s a scary proposition and in many ways, they are running blind. With no standardization of warning track dimensions and materials, the situation changes with every series, with new or different obstacles to overcome every three to five games.

With this basic premise in mind, let’s go back to our Dodger Stadium collisions. Not only do Puig and Harper have to counter these aforementioned variables, but they also have another aspect to deal with – the effects of the video board on how their brains process the information and how their bodies function as a result of this information processed in a correct and timely manner. While this is simply conjecture on my part, I do wonder if the lights of the board out in right-center might have played games on the vision and depth perception of Puig and Harper, causing their brains to not be able to process the proprioceptive  and exteroceptive cues that would have allowed them to make the proper adjustments in order to not run into the wall, full speed. Along with the lights, I wonder if the chain link fencing protecting the board might have played a small role in distorting the visual and audio cues that go into determining how close the wall was to the players.

Overall, we have a dicey situation. Poorly defined criteria, a multitude of materials that add oodles of variables into how well and how quickly a player can determine where he is on the field as he is tracking a flyball, and antiquated warning track dimensions that are probably in need of re-evaluation to keep up with the pace of the game and the size of the players, are all at play here.